Well the truth is I’ve never been that much of a fan of originality. I appreciate that its exactly what some people want but each to their own. My ideal is a car that looks superb and drives superb. It really is hard to beat some of the iconic car designs of the sixties but who wants to drive around in a car that feels like an engineering museum piece when we have become so accustomed to the smoothness and comforts of modern driving.

I’m hoping to achieve something similar for the Cobra, ie. a classic shape with a modern twist and under the bonnet a mighty V8 with far too much HP! The LS3 with a magnum 6 speed will be the perfect platform. Its still an American V8 with insane amounts of torque, the all-aluminium construction makes for a ridiculously lightweight package with a modern ecu allowing for switchable maps it can be as economical as a medium family car or as brutal as fully fledged drag racer.

Ok, that’s the kind of desire set down in words – now how to go about it? Of course it would be insane to do this to an original cobra (not that I could afford to) so a modern replica it has to be.  That said, I dont feel that a modern tunnel chassis car weighing in at around 1ton and capable of 600hp (after IVA of course) will be too much of a compromise to suffer.

I did consider the other two main rivals in the UK Dax and AK and I can understand why they have a terrific following, there are after all some excellent examples around, but for me the GD design and quality of build is superior. GD may be slightly more expensive for the chassis and body parts but after that the really expensive bits for a high end build are pretty much the same whatever you buy and the difference in price by the time you get to the end becomes much less significant.

I have been planning to build a cobra for a very long time, eventually I decided I best be getting started. So here I am.

Between Xmas and new year Andy at GD cars was kind enough to open up especially for us to come down and visit the showroom. I had already decided I was buying one so he didn’t have to do a hard sell. Before the visit I had already read enough to convince me that a GD was my first choice and nothing I seen or heard on that first visit changed my mind so I had placed my order before I left…

I’m going with a modern take on a cobra rather than a traditional route, LS3 engine and no chrome or shiny metal in sight. I know it won’t be to everyone’s taste but….. (its my bucket list!)

Body Colour — choices – I really like the dark red metallic with fat billboard tyres aka the AK new demonstrator.  Maybe a little too traditional though.

Then there’s plain grey with red and black accents – my son (who will be helping with the build) prefers this one – so that’s what we are going with for now. I’m guessing I don’t have to finalise that decision right now as the body isn’t due until May.

I’m aiming at something like this LHD car — (all black wheels and black windscreen already on order!)

End of January 2016    I was kindly invited to meet Dale and Keith A, who were both fitting their body on the same day and only live just over an hours drive South from me. It was great to see their cars nearing completion, what a high standard they are both achieving. I was particularly impressed by the attention to detail both in the kit and the workmanship of Keith and Dale….. Thanks for inviting me down!

Well by luck or good fortune I was able to get a jump start and acquired a previous GD customers Chassis. He wasn’t able to progress for personal reasons and had not touched the chassis other than fit the brake lines so it’s a clean start and an eight-month time saving for me…

First Job was to get all the rolling chassis bits together. Diff has been sent off to AllGears of Nottingham to recondition and de-rate – the hubs are off to Wards for refurb.

Both have promised me returns in about 3 weeks so that gives me a few weeks to find some Etype drive shafts and wishbones and get all the other parts ready to make the chassis Roll.

Nothing much else to do except wait…….but then again I’m already quite a bit ahead of time….so not complaining. 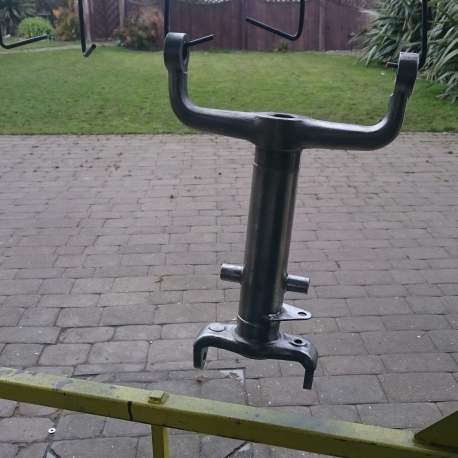 Found the short Drive Shafts and Wishbones, these aren’t essential as I already have the standard ones but I really prefer the deep dish on the rear Wheels – Keith A has used these same shafts on his build and has recently acquired his wheels – they look just right.